You are here: Home>Memories>World War 1 and World War 2>Home Guard 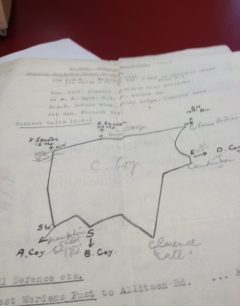 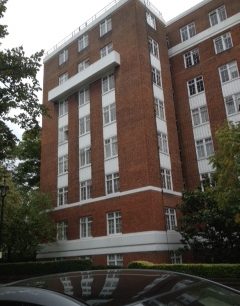 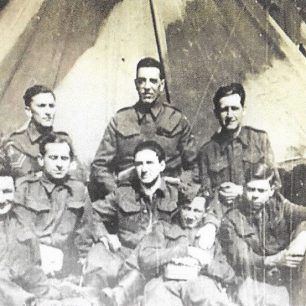 George Orwell and friends in the Home Guard 1941 (copyright UCL)

Formation of the Home Guard

The Home Guard, at first known as Local Defence Volunteers, was formed in spring 1940, and a quarter of a million men volunteered to join in the first twenty four hours.

By 1941, nearly two million had enlisted. It was entirely part-time and unpaid, apart from a small nucleus of administrative officers and NCO instructors from the regular army. The age range was supposed to be 17-65, but some joined at 15, and some were in their 80s. They had to be provided with uniform to prevent any chance of them being shot as spies.

There were eight companies of Home Guard in Westminster during the War and St John’s Wood was ‘C’ Company of the 5th County of London Battalion. From the papers of Lieutenant Drukker in Westminster Archives, it seems that their main operational role was, in the worst instance:

The tactical idea was to hold up the German invader so that regular troops were given time to arrive for battle. By 1941, no invader could have travelled a few miles in open country or a few hundred yards in a big town without coming on a knot of armed men.

The Home Guard arranged to use church bells as a call-to-arms and the ringing of bells was forbidden unless it was to signal the invasion.  The only time this was suspended was when Churchill allowed bells to be rung after the victory at El Alamein.

The Home Guard were not the only people in uniform.

Other military units in the area were:

Drukker’s collection of training pamphlets and manuals contain many fascinating items  such as  plans for a mock attack in July, 1941 when the unit was split into invaders and defenders and the aim was to capture the enemy’s post at the junction of Avenue Road and Queens Grove. There are also official Pocket Notes on the way to identify German Units, which noted that it is by no means impossible that German soldiers and parachute troops will appear in British uniforms in order to confuse the defence, and First Aid for Fighting Men, which at one point shows how to use 3 leather belts to make a harness for an injured man so that he can be worn like a haversack by his rescuer who will still have his hands free to use his rifle.

One section of Company ‘C’ was called the  ‘Foreign Legion’ – i.e. refugees living in St John’s Wood, who proved rather hopeless at close order drill.  Their commanders were George Orwell, the writer, and Frederic Warburg, the publisher.  Orwell himself was a source of danger at one point when he called “Fire” and a practice non-explosive bomb went whizzing past dozens of men, one of whom lost all his false teeth, and another was unconscious for twenty four hours.

George Orwell, the journalist, novelist and campaigner against social injustice, well known for his opposition to totalitarianism, had been declared unfit for any kind of military service in June 1940  and wrote to a friend  Now we are in this bloody war we have got to win it and I would like to lend a hand.  They won’t have me in the army at present, because of my lungs (letter to Geoffrey Gorer in 1940), but he managed to join the Home Guard and when he moved to Langford Court in spring 1941 he became a platoon commander in the St John’s Wood Company, where he was known as Sergeant Blair.

Another volunteer was Frederic Warburg, publisher of Orwell’s works  and a WW1 veteran, who said Orwell was  implacably determined to destroy his enemies without fear or mercy, if only they came within his reach.

View of the bombing from Langford Court

The flat at Langford Court gave a good view of the bombing and Orwell noted in his diary on 17 April 1941  Very heavy raid last night probably the heaviest in many months so far as London is concerned. Bomb on Lords cricket ground ( schoolboys  having their exercise at the nets as usual this morning, a few yards from the crater) and another in St Johns Wood churchyard. This one luckily didn’t land among the graves. Later that year he wrote  the City is a mass of ruins with St Paul’s almost untouched, standing out of it like an enormous rock, but the less –bombed parts of London have been so completely cleaned up that you would hardly know they had ever been damaged.   Standing on the roof of this tall block of flats I live in and looking all round, I can see no bomb damage anywhere except for a few churches whose spires have broken off in the middle, making them look like lizards that have lost their tail.

Orwell felt the Home Guard were an ideal fighting force, being unprofessional, volunteer, anti-Nazi and animated by a deep affection for England.  However, in an interview with V S Pritchett for the New Statesman in 28 January 1950 he, although an Old Etonian,  mentioned the dangerous fascistic tendencies of the St John’s Wood Home Guard who were marching to imaginary battle under the Old School Tie.

Writing for the American Partisan Review, in Nov/Dec 1941, he described the formation of the Home Guard and explained that because it was  unpaid it was inevitable that nearly all commanders were retired colonel or people with private incomes as working men could not  find time to do administrative work.  At the beginning, the Home Guard mainly comprised men who had fought in the last war and were now too old to join up, so weapons were in the hands of people who were anti-fascist, but politically uneducated.  Later the idea that when weapons are being distributed it is as well to get hold of some of them began to sink in, and a certain number of left wing intellectuals found their way into the ranks.

Orwell  had  a socialist vision for the Home Guard as a revolutionary People’s Militia, writing Somewhere near a million British working men now have rifles in their bedrooms and don’t in the least wish to give them up but somehow that does not conjure up a picture of the inhabitants of the Wood who seemed happy to disband when the Home Guard stood down in November 1944.