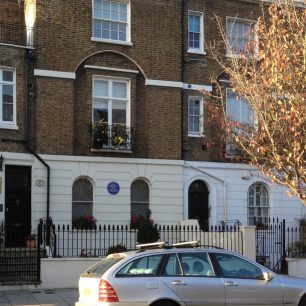 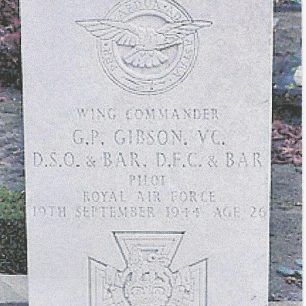 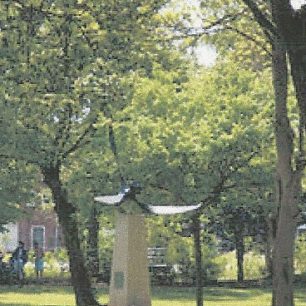 Guy Gibson’s career in the RAF

He joined the RAF in 1936 and, at the outbreak of War, became a bomber pilot with 83 Squadron.  By the age of 24 he had completed over 170 operations and been awarded the Distinguished Service Order and Bar and the Distinguished Flying Cross and Bar. He became Chief Flying Instructor in 1942 and then a Wing Commander  with 106 Bomber Command.

In 1943, he was selected to lead 617 Squadron, known as the ‘Dambusters’, in their attack on the Ruhr Dams, when they had to fly low over mountains at night carrying Barnes Wallis’  bouncing bombs. It took five attempts to breach the Moehne Dam and then Gibson led three of the remaining planes  to attack the Eder Dam.  Only 11 Lancasters returned of the 19 that set out, and 53 men were killed.

Gibson received the Victoria Cross, the highest decoration for gallantry “in the face of enemy” in the British and Commonwealth armed forces, and subsequently embarked on a lecture tour of America.

Then came a spell at the Air Ministry  – this was when he was able to have a home in Aberdeen Place with his wife, the actress Evelyn Moore whom he had married in 1940 but had rarely seen – and then he resumed operational duties in 1944.

In September 1944 he was killed in a raid over Germany. For many years it was assumed he had been shot down, and later that he had run out of fuel. He is now thought to have been killed by friendly fire, when an English plane mistook his plane for a German one.

A man born for war

One of his fellow pilots, Johnny Johnston, said that Gibson could be faulted for aloofness, often failing to connect with his crews personally,  but not for his leadership. “As he called each aircraft in [to bomb the Moehne dam], he flew alongside them to attract some of the defence. He said “you’re doing this, I’m doing this, we’re doing this together”.

After his death Barnes Wallis said “he had pushed his luck beyond all limits and he knew it.  But that was the kind of man he was  – a man born for war but born to fall in war.”

His flight log in on display at the Windsor Castle pub in Crawford St, London and his V.C. is at the Air Force Museum, Hendon.