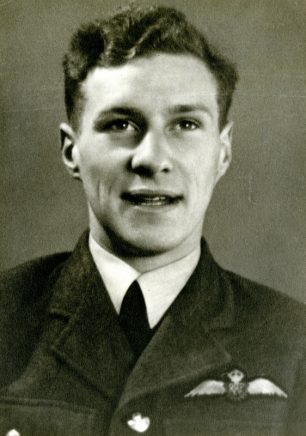 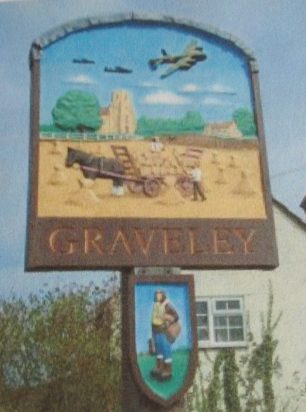 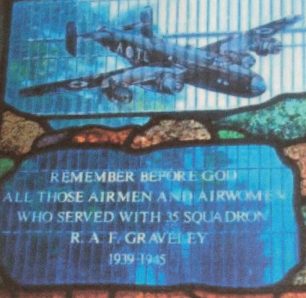 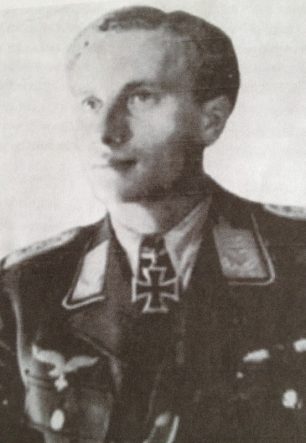 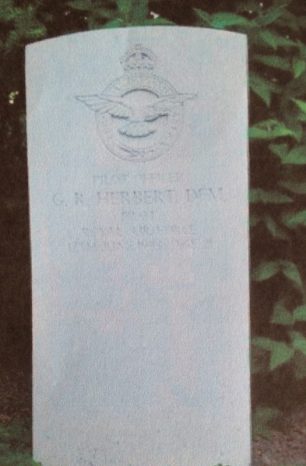 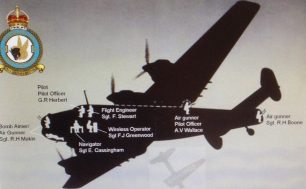 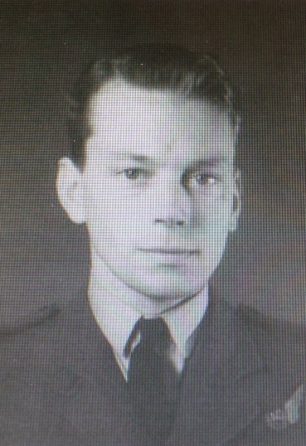 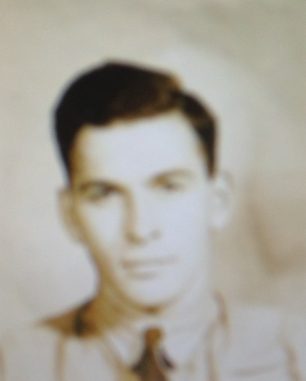 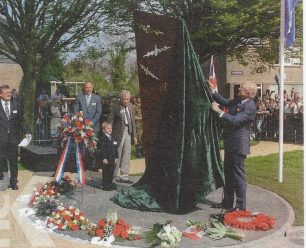 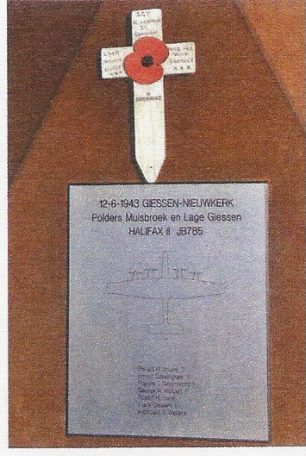 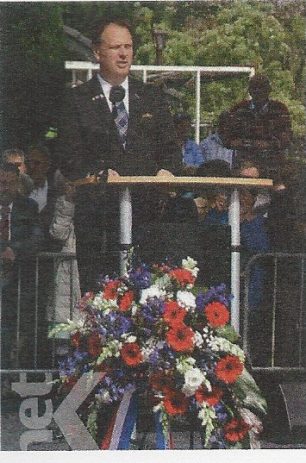 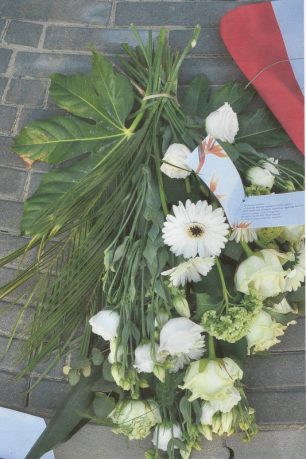 As a boy George went to Gibbs preparatory school in Kensington and then in 1935 he went to Radley College and had a successful few years there, becoming a School Prefect, and representing the School at swimming and boxing as well as being in the second cricket, football and hockey teams. He joined the RAF Volunteer Reserve [RAFVR], which had been formed in 1936 and was initially composed of civilians recruited from Reserve Flying Schools.  Navigation instructors were mainly former master mariners with no air experience but by September 1939 RAFVR  comprised  6,646 pilots, 1,625 observers and 1,946 wireless operators.  On being accepted for aircrew training, a civilian took the oath of allegiance and waited to be called up for training – whilst waiting, he was eligible to wear a silver RAFVR lapel badge. George enrolled at RAF Cardington in April, 1940.

In October, 1941 George was with 76 Squadron as a sergeant pilot and in one month, for example, targeted Cherbourg, Hamburg, Berlin (when it was so cold the airspeed indicators and compasses were rendered unserviceable), Brest and Hamburg again. On 30 November 1941 the aircraft crashed when the brakes failed on landing at Linton on Ouse instead of their regular base at Middleton St George.

Bomber Command was the only weapon capable of striking directly at the heart of Germany but its effectiveness was limited because it could not focus on an individual target. By 1941, a special force (Pathfinders) was being established to lead the main bomber streams and, in August, 1942,  6 squadrons were based  near each other with the most experienced crews. One of these was 35 Squadron of Halifaxes, based at Graveley in  Huntingdonshire. To be accepted as a Pathfinder you had to volunteer and you had to accept a tour of 45 sorties, which was half as long again as a bomber crew’s tour.   The risks were greater and crews were in danger longer than  bomber crews as they had to mark the target and circle the area to guide in the main force. A total of 150 aircraft were lost in 3 years.

RAF Graveley was the first RAF airfield to use a device known as FIDO – Fog Investigation and Dispersal Operation.  It had two pipelines along both sides of the runway and petrol was pumped along them and then out through burner jets positioned at intervals along the pipelines.  The vapours were lit, producing walls of flame which lifted the fog and allowed aircraft to land safely.

On 12/13 May, George and his crew (Sgt R H Makin, Sgt K Cassingham, Flt Sgt F Greenwood, Sgt R H Boone, P/O A V Wallace and Sgt F Stewart) flew to Duisberg, on 13/14 May to Bochum, on 23 May to Dusseldorf and 27  May to Essen  and 29 May to Wupperall.  Then, on the 11 June, 1943 they took off in Halifax 11 JB785 for the railroad emplacements at Munster, together with 29 Lancasters, 21 Stirling and 21 Halifax bombers. The mission was a success but on the journey back they were picked up by German radar and night fighters were sent up to intercept them. Nothing was heard of JB785 until it was discovered it had been  shot down by night fighter Lt Werner Baake over Holland at 2.40 a.m. and the plane crashed near Giessenburg in the Netherlands.  All those in the front of the plane were killed, but Wallace and Cassingham at the rear managed to bail out and were later taken prisoner. George Racine Herbert is buried in the Rotterdam (Crooswijk) Roman Catholic cemetery .

His obituary in the Radleian no 596 in March 1944 says that by those who knew him he will be remembered chiefly for his unfailingly cheerful and gay disposition.  We always felt that he had just the qualities needed for a first-rate pilot, and so were more delighted than surprised when, as a Flight Sergeant, he was awarded the D.F.M. in May 1942. He soon after became a Warrant Officer and then was gazetted as a Pilot Officer in January 1943. He  must have been an ideal leader to be under in an emergency, and we understand that the testimony of the crews who served under him fully bears this out.  He will be sadly missed by all who knew him.

A poem written by Arundell Esdaile and dedicated to George was sent to his mother and appeared in The Times, 9 October 1943:

Pathfinders
Through the dark nights they flew; the flares they sowed
Lit up the targets for the rest to find.
They are lost; but shall we falter with our load,
Searching our targets? Though the night be blind,
Still their bright memory lights us on the road.

LIE IN THE DARK AND LISTEN
by
Noel Coward

They’re going over in waves and waves
High above villages, hills and streams
Country churches and little graves
And little citizen’s worried dreams.
Very soon they’ll have reached the sea
And far below them will lie the bays
And coves and sands where they used to be
Taken for summer holidays.
Lie in the dark and let them go
Lie in the dark and listen.

Memorial in Holland in 2015

In May, 2015 2 local history societies in the Netherlands organised by Peter den Teck dedicated a memorial to 6 Allied planes which crashed in the Municipality of Giessenlanden in the Netherlands; one of these was JB785 and they searched  for relatives of the dead airmen. We were unable to find any living relatives of George Racine Herbert, but thanks to various people including the archivist at Radley College, Steve Dyke of hewasahero and Paul Herod,  and information from the web we were able to find a photo of him to join those of the rest of his crew in the local Museum.

Peter den Tek, the organiser, wrote that 32 members of families of the British crews joined the families of American and Canadian aircrew of 6 planes at the ceremony, which had a flypast by a Lancaster and a Spitfire before speeches from various people and then the band of the Royal Dutch Air Force led a march to the monument where the unveiling took place and the Last Post, then one minutes silence and the four national anthems were played. Local eyewitnesses were introduced to the families of the airmen. The next day there was a visit to Rotterdam Crooswijk where the 11 British and 1 Canadian airmen are buried, and the flowers and card from the St John’s Wood History group were placed on George Herbert’s grave. On the monument are the names of the villages where the planes came down and on the base six shields with names, planes and dates.