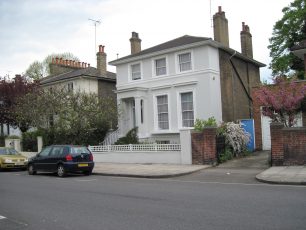 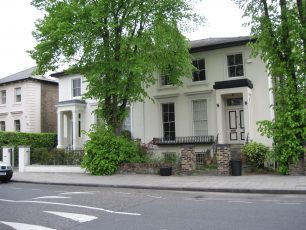 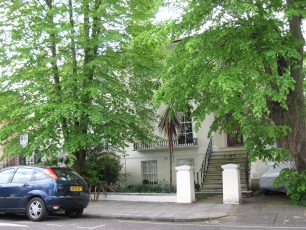 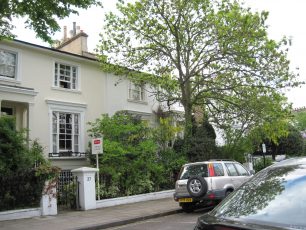 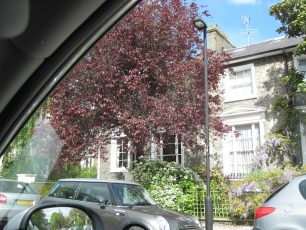 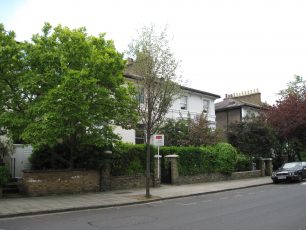 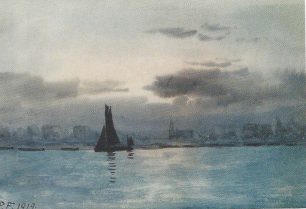 an  actor was living at no 13 (now the site of a new house) in 1901 with his wife Ella, five year old son, a cook, housemaid and trained nurse. He was an American, (real name Charles Nicholas Carlton) and also a lyricist, who acted in the theatre before making his first film in 1916, where he was usually dressed in winged collar and pince-nez , playing  college deans, bankers and judges until his death.  He was a memorable mad scientist in Laurel and Hardy’s Habeas Corpus [1928].

dramatist, lived at no 16 in 1891, aged 42, with his 29 year old wife, unusually described as a secretary,  parlour maid and cook. He had many successful plays produced  at the Adelphi, notably The Bells of Haslemere, in 1887  and The Union Jack,  in 1888, both in collaboration with Sydney Grundy  and In the Ratwonks and Harbour Lights   with George R Sims (also a crime novelist, journalist and sportsman) which both had long runs.  Pettit and Sims also wrote various Gaiety Theatre burlesques, one of which, Faust – Up- to –Date, gave a new twist to the phrase up-to- date meaning abreast of the times.

lived at no 26 in 1901 with his wife Faith, who had been born in New York.  Case, born in London in 1854, was a  Professor of Music,  who at various times was Professor at the New England Conservatory in Boston, the New York College of Music and Austin College, Texas.

lived at no 35 in 1901. He was an actor and vocalist, one of the original members of the D’Oyley Carte company which produced the early Gilbert and Sullivan comic operas.  In January, 1882 he appeared at the Standard Theatre, in New York, playing Bunthorne in Patience in front of Oscar Wilde and was described as a young up-and-coming actor. Wilde was asked what he thought of the parody of himself and replied “Caricature is the tribute which mediocrity pays to genius.”

Madeleine, however, was more famous as a playwright and between 1893 and 1907 her success surpassed the commercial success of most men and women dramatists in America or Britain, establishing  a record for a woman by having three plays running simultaneously in New York in 1897.  She began her career at fourteen touring  with light opera companies and probably met her husband in the 1880s in America when they were both performing for D’Oyley Carte.She began to write short stories for magazines and then turned to plays; her first success was Jedbury Junior in 1895 followed by many others including Mice and Men in 1901 and the Sugar Bowl in 1907 and some of her plays were turned into films.  She was a staunch feminist and champion of womens’ suffrage.

was living in no 37 in 1911. She was an American opera singer, a member of the Whitney Opera company which had been formed in 1886 and opened the Whitney Opera house in Chicago in 1907. Aged 27, she had a maid living with her.

an operatic tenor, lived at no 42 in 1901,  with his wife Frances aged 59 and a Dutch servant. He had sung in Raymond and Agness as far back as 1855, in Lurline, a grand romantic opera, in 1860 at Covent Garden and was in the Adelphi season of 1877 when Faust,the  Bohemian Girl and the Flying Dutchman were produced.  He also contributed caricatures to the publication Musical World.

stage manager, was living at no 54 in the  1901 census with his wife Ellen, a professional singer,  and 25 year old theatre manager son, as well as a niece and two servants. When he was only 19 Henry had been appointed conductor of the Orchestra in Edinburgh’s Theatre Royal  and met Sir Henry Irving, to whom he became adviser and friend. He was stage manager at Irving’s Lyceum theatre in the Strand after Irving bought the theatre in 1878 until Irving’s death in 1905.  The business manager at the Lyceum was Bram Stoker who used Irving’s mannerisms and charisma to create Count Dracula.

artist painter in the 1901 census, and living with his wife, two daughters and a niece and one French nurse/domestic at no 21, is better known to us as a song writer who wrote his first successful song Abdul Abulbul Amir before he graduated as a civil engineer in 1881, followed by Phil the  Fluther’s ball and the Mountains of Mourne.