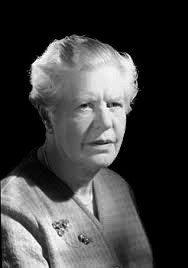 Mrs Emmie Tillett lived at 11 Elm Tree Road from 1949 until her death in 1982 .( Her charming house there has since been demolished ).  She ran a concert agency at 124 Wigmore Street, W1 called Ibbs and Tillett, in its day the most important in the country. A pillar of London music, she was known as the Duchess of Wigmore Street. She represented most of the famous pianists ( see Pianists in the Wood) and famous singers such as Kathleen Ferrier, finding engagements for them  all over the country and negotiating their contracts.

While still a young woman, Emmie Bass as she then was, worked in the agency and began a relationship with John Tillett. This continued until after his wife died when the two were able to get married. and then run the agency together.

One  of the many stories Emmie told was how she had to collect Rachmaninov from Victoria Station and drive him to his hotel. That day it was pouring with rain and her car did not have any windscreen wipers. So it became Rachmaninov’s job to wipe the screen with the cut side of a potato !

Another story was that the pianist Shura Cherkassky always visited Emmie at Elm Tree Road before he gave a concert in order to stroke her cat – to bring him good luck.

After the pianist Solomon was incapacitated by a severe stroke, Emmie would go round to Burleigh House every Sunday evening to see him and Gwen.