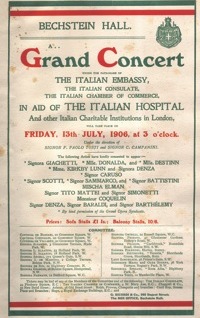 Concert programme
with thanks to the archivist at Wigmore Hall 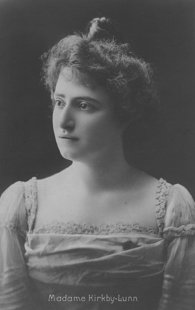 Louise Kirkby Lunn
with thanks to the Museum of Music History

Louise Kirkby Lunn (1873 – 1930) was a leading contralto who had trained in her native Manchester and studied at the Royal College of Music in 1890 for three years. In 1895 she appeared in the first of Henry Wood’s Promenade concerts and then began her stage appearances, including small roles at Covent Garden.  Then in 1896 she joined the Carl Rosa Opera Company as principal mezzo-soprano until her marriage in 1899 to William Pearson.  In the 1901 census they are living at Hyde Park Mansions, with a year old son named  Louis Kirkby and her aunt Anne living with them. They later lived in St Johns Wood Park. She sang many roles at Covent Garden during the first two decades of the 20th century and first appeared at  the Bechstein (later Wigmore) Hall in 1902, giving her first full recital (with pianist Percy Pitt) on 3 November 1906, followed by many others in subsequent years when her husband was manager there.

She also performed in a charity concert in aid of the Italian Hospital in London in July 1906 and was awarded the Gold Medal of the Royal Philharmonic Society for her rare combination of personal artistic achievement added to a richly endowed nature.   She was famous for her Delilah in Samson and Delilah, and for Gluck’s Orfeo. In 1909, she sang Elgar’s Sea Pictures with Elgar conducting  the orchestra. She often toured Europe and made trips to New York and Australia. In 1922 she made her farewell to Covent Garden with her celebrated part of Kundry but continued for some years to appear in concerts and recitals. Sir Henry Wood said she was a singer with a glorious voice and an even tone throughout a compass of well over two octaves, a singer with whom I never found fault in so much as a quaver all the years I worked with her, and who never sang out of tune.

Various recordings of hers may be heard on the internet, including “Have you news of my boy Jack”, recorded in 1917