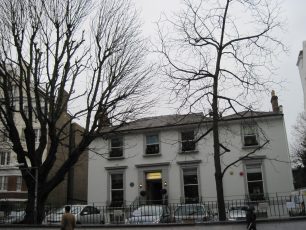 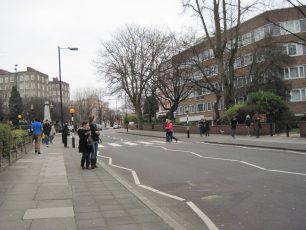 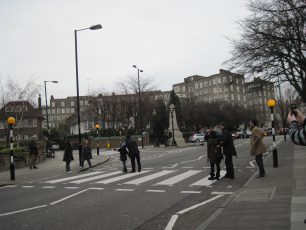 Tourists on the crossing
Bridget Clarke 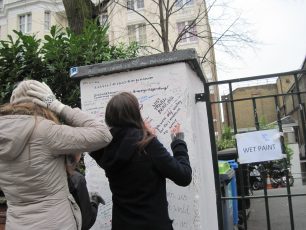 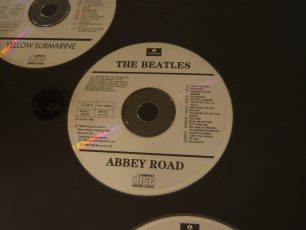 was built in 1828 and is the third oldest house on the Eyre estate, after 8 Elm Tree Road and 7 Cochrane Street . It was a fair-sized  house which was purchased in 1929 by Francis Myers, a developer and director of the Central London Co Ltd, who originally proposed to pull it down and build flats on the site, but decided to sell the house in 1931 to the Gramophone Recording Company. This  eventually became EMI and the house was converted into sound recording studios. In February 2018 the Studios were included in the top 10 of a new UK heritage list.

On the building is a plaque from Westminster City Council saying Sir Edward Elgar opened and recorded in these studios 12 November 1931. There is a film on YouTube showing him with the BBC Symphony Orchestra, conducting  his Pomp and Circumstance March (Land of Hope and Glory). He begins by saying  Good morning, Gentlemen. Good to see you all. Very light programme this morning. Please play this tune as though you’ve never heard it before. In June 1932, he recorded his Violin concerto with the young Yehudi Menuhin, a recording which has remained in print on 78 rpm, LP and CD ever since.

In 1932 took two days to record his Concerto No 5 at the studios.

made many recordings there, as he lived round the corner.

– In 1958 the studio became the centre of rock music after Cliff Richards recorded, Move it, which is arguably the first European Rock n’ Roll single, and the Shadows produced Live at Abbey Road. From the late 1960s to mid 1970s, Pink Floyd recorded their albums there

From 1962 to 1970 the Beatles recorded almost all their singles and albums in Abbey Road studios which then became famous after their 1969 album Abbey Road, with its cover photo of the zebra crossing outside the studios. In the years since the crossing and the studios have become a place of pilgrimage for Beatles fans from all over the world, and the graffiti on the fence have to be painted over every month.

Many of these became famous, too, notably Sir George Martin, and Ken Townsend who invented the groundbreaking effect known as ‘automatic double-tracking’.

The future – EMI put the building up for sale towards the end of 2009, which brought a threat that the studios might be sold to property developers. In 2010, the British Government protected the site by granting the studios English Heritage Grade 11 listed status, thereby preventing the building from subjection to major alterations.