but no longer operating 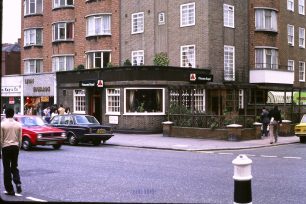 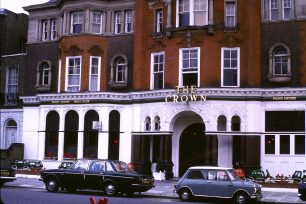 THE KNIGHTS OF ST JOHN

The name of the boxer who ran the pub up until it closed was a Mr. Ron Reeder. I met Ron when I migrated to Australia on the SS Ranchi in 1951. I was sixteen and Ron about eighteen. Ron was a big, friendly steward who served me large orange drinks, nice and cold, in the tropics.

Ron, however, was more interested in my seventeen year old sister Margaret and they became friends, and later friends of the whole Stevenson family.

Ron was an amateur heavyweight boxing champion, spoke with a “cockney accent”(to my Scottish ears anyway). Ron was very successful as a steward and in his early twenties he was the head barman on the grand passenger ship The Himalaya and later The Arcadia. My sister was not interested in forming a permanent relationship with Ron but he continued to meet with our family in Melbourne, and our family with him, when any of us visited  London.

My father, Dan Stevenson, and Ron, in later years, had a common interest in the Masonic Lodge and we were all sorry to hear  that Carrington’s was closing down the pub and Ron was to seek refuge at another pub, also in London

Ron’s life was sport and he loved to meet the Australian cricketers and swop stories. He was friendly with Keith Miller and Ray Lindwall who used to patronise the pub when in London playing at Lord’s.

Pauline was a superb hostess, a treasure and a really lovely lady. May she enjoy the long, happy and healthy retirement she so richly deserves. As well as a number of regulars among the hall porters from mansion flats, the place was occasionally visited by well known figures, the late Willie Rushton and actress Sheila Steafel to name but two, and was a “busman’s holiday” venue for the keepers of The Crown in Aberdeen Place.

On the corner of Allitsen Road is now, for want of a better name, a gambling club but, not always so. You must believe me when I tell you that it was once a public house called the Pitt’s Head; busy, rough and quite a landmark. I do not know if it took its name from the younger or the elder Pitt but, whichever it was, it provided much entertainment for us younger folk. Often, on a Saturday night, we would wander around at a respectful distance waiting hopefully for the almost inevitable drunken brawl that would ensue. The great attraction was that it was not men who fought out their battles on the pavement, it was the fair sex who, to our great delight, had their differences to settle. How could a gentle place like St. John’s Wood produce such a depraved behaviour? As I have already said there were many places of poverty and it is at this point that we find we are at the approaches to just one of them.

In my early days in the Wood there were still many horse drawn vehicles both private and commercial.  Brewers used the beautiful dray horses for many years and the old Walter Gilbey and Co were still using hansom cabs for some of their travellers. I wonder how many people today can boast of a ride in one of these. Beer was quite potent then and, at three old pence a pint, was still cheap when compared with whiskey at twelve and sixpence a bottle.

Allitsen Road was not always named such; in my young world it was known as Henry Street. On the south side we had rows of deteriorating shops with flats at the High Street end, on the north side, a mixture of similar shops and three story houses from Charlbert Street down to the New Inn public house on the corner of Townshend Road. Still on the north side and again going towards High Street, little seems to have changed and buildings there now are still of the earlier era. The street was complete with a small cul-de-sac called Henry Court and behind this, Bookers Place. Both of them the territory of the local ‘bookies’. Front and back doors of the little houses were always open for a quick getaway should the law arrive. When it did we had much fun watching the chase. Charlbert Court, Eamont Court and Townshend Court are only the modern blocks that houses the ghosts of hundreds of small terraced working class homes.

The majority of its regular patrons were residents of Wharncliffe Gardens.  It was an extremely friendly and informal pub with a pronounced community atmosphere and an old fashioned knees-up air about it, especially on Saturday nights and Sunday lunchtimes, when the host ecouraged the merriment of the multitude who sang along to the piano’s accompaniment. In those days of less stringent health and safety requirements the landlady’s bulldog frequently tottered and slobbered its way along the lounge bar counter. Nobody seemed to mind. The Crown was also frequented by visitors to Lords on match days and did good business on those all too frequent days when rain stopped play.  Now empty and in deteriorating condition it must number among the many Grade Two listed buildings at serious risk.

THE HEROES OF ALMA

This was a relaxed, restful and slightly out of the way watering hole, free from traffic noise, hustle and bustle, frequented by locals and by people who worked at Abbey Road Studios as well as some of the artists who recorded there. There was nothing very special about it, but it was a friendly and pleasant enough place in which to relax, drink, chat or be left in peace with one’s thoughts.

THE PRINCE OF WALES

This was on the corner of Ordnance Hill and Queen’s Grove and was replaced in the 1960s by the Rossetti restaurant, which in its turn was replaced by an apartment block. In Bill Clarke’s book, Royal Salute, he writes that it was known as Rosie’s, after the popular landlady who took a motherly interest in the ‘boys’ at the barracks, and allowed them to use a room at the side of the establishment as a changing room where they could put on casual clothes after having to leave the barracks in regulation clothes. It was also where Will Andrews, a groom at Mr Partridge’s house in St John’s Wood Park in 1901, could still be found in the 1950s.