and the Islamic Cultural Centre 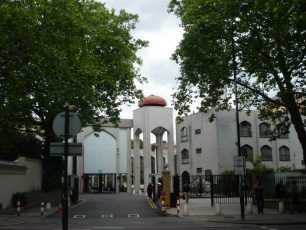 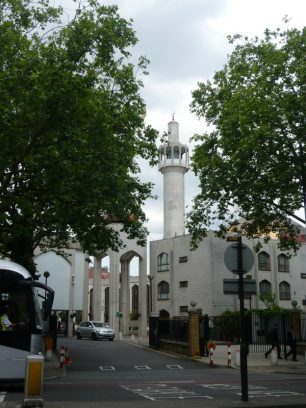 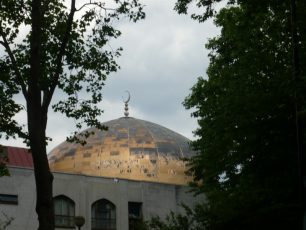 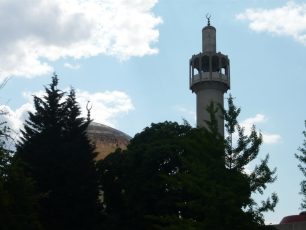 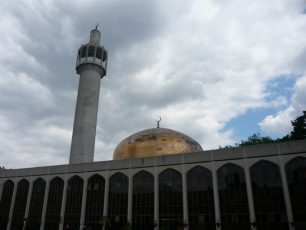 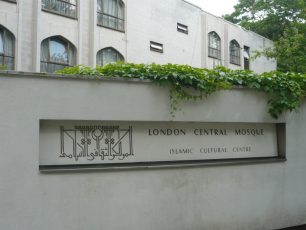 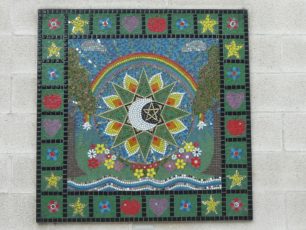 The London Central Mosque forms a splendid landmark on the western side of Regents Park. Its simple distinctive shape with minaret and dome, is visible from the main entrance in Park Road and makes for a very pleasing sight above the trees from within the Park.

Muslims started their claim to have a mosque and cultural centre in London very early during the nineteen twenties. Some donations were initially collected from Muslim leaders of the time such as the Nawab (Ruler) of Hyderabad, India. It was not until 1940 that the British government agreed to grant the Muslim community a piece of land in London for this purpose.

In 1944, the government purchased Regent’s Lodge, formerly North Villa, which had been used as a children’s evacuation centre during the Second World War.  This was adjacent to Hanover Gate. The Islamic Cultural Centre established a base in this building. There followed a long delay due to financial and political problems, and the whole mosque project was put into abeyance until 1969 when a generous donation was granted from King Faisal of Saudi Arabia. At this time an international competition for the design was held, which was won by the architect Sir Frederick Gibberd. John Laing Construction Ltd became the builders. Work was started in 1974, took two years, and cost £6 million.

Inside the mosque there are two main prayer halls, separate for both men and women, with their own ablution areas; The Imam leads the prayers from the mihrab (prayer niche), which indicates the direction of the Ka?abah (the Qeblah); the sermon is delivered from the minbar (pulpit). Outside we see the tower of the minaret (tower), from where the call to prayer might be uttered, and the dome, which has a spiritual significance. This  is a common feature of many mosques, as the Muslims refer to the sky as a dome (Kubbat Assama) making allusion to the loftiness of God, and that through true worship only as a means of perception we can ascend to him and know about Him.

Knowledge and understanding are an important part of Islam, so there is a big library, and a bookshop. Publications include an academic journal and a newsletter. You can visit the café and offices. Separate halls for weddings and events are also provided, and meeting rooms for seminars and conferences. There is space for the big Friday crowds and for the 15,000 worshippers who come to holy festivals.

A big part of the work of the Islamic Cultural Centre is to foster unity in the community where so many interfaith activities are held. It is recognised that we live in a multicultural society now. Education is very important and classes in Arabic, religious knowledge, and studies of the Qu’ran are held. Many schools of all varieties visit the premises. Guided tours can be arranged for groups by emailing: visits@iccuk.org . Outreach to prisons, universities, hospitals and other institutions take place regularly. The ICC also acts on behalf of other Muslim communities, with services such as conducting marriages and providing help and advice in divorce and marriage laws; in that regard it has a registry office: registrar@iccuk.org. Among others services there is the Zakkat committee that endeavours to help the poor and the needy from the alms and charity funds.

London Central Mosque and the Islamic Cultural Centre are a well recognised part of St John’s Wood, working with both government and non-government organisations, consulting and meeting with the Metropolitan Police on community and race relation matters. And just as importantly serving worshippers, disseminating knowledge, and together with the churches and synagogues in the area, adding to the richness in the diversity of both religion and culture in our great city of London.

With strong leadership and religious and cultural ties, (the trustees are Muslim ambassadors), the London Central Mosque and the Islamic Cultural Centre have become the home of Islamic culture in London. It is through its work both within the local Muslim community and just as importantly the broader interfaith community, that we continue to build a bridge of more understanding, tolerance and harmony.