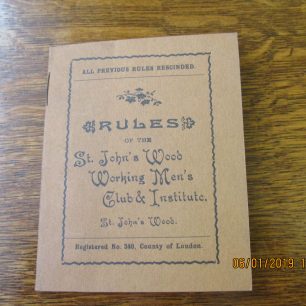 Rules of the Working Men's Club 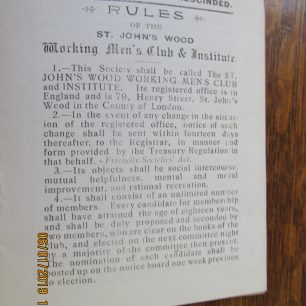 Rules of the Club 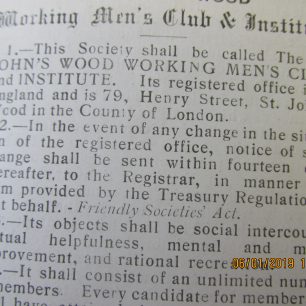 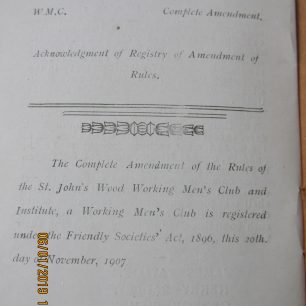 in Allitsen Road was always much better attended than any of the local pubs.  Unlike pubs at that time, children were allowed into the Club. I will always remember one Sunday night when, to prove that we were emerging from the hardships of wartime restrictions, my Mum took me outside into Allitsen Road to show me the street lights. They had been switched on for the first time that night.

I seem to remember my Grandfather had something to do with the founding of the Club. It was situated opposite De Walden Buildings, next to Reg Reed’s grocery shop. The premises were tailor made for the needs of a working men’s club with a large bar containing a billiards table, a darts area and backing on to a large hall with a stage at one end for entertainment. The Club ultimately had to move out when the Barrow Hill Estate was built. Alternative premises were found in the High Street, next to the Isaac Newton pub, having ground floor and basement areas, although when compared to the Allitsen Road site it was much smaller and never adequate. It was no surprise that over a number of years membership dwindled until it finally closed in about 1957.

Rules of the Club

The Rule Book belonged to her Grandfather William Robbins – his Father and he were the Taylors in Henry Street. Other relatives of hers, Jordans and Sargents, also lived in Henry Street.  Her other Grandfather, William Sargent, who died in the First World War is commemorated on the War Memorial on Baker Street Station.

by John Disson with photos from Kathleen Ponsonby